Posted on February 15, 2019 by The Commish Leave a comment 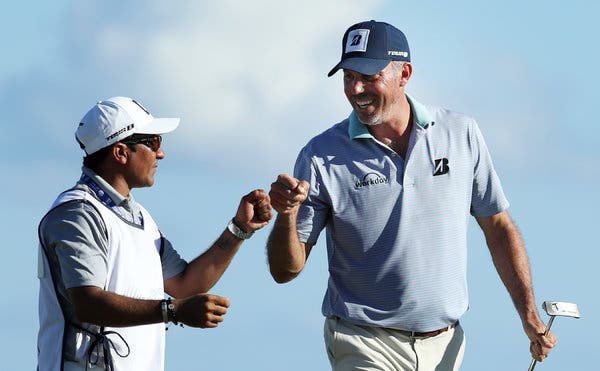 Los Angeles -Matt Kuchar heard a few catcalls from spectators at the Genesis Open on Friday. He’s seen the negativity on social media and in the golf world at large. And he decided to make amends.

After his first round Friday at Riviera Country Club, Kuchar issued a statement in which he apologized and said he would be making full payment of the amount a fill-in caddie requested after the veteran golfer paid him just $5,000 following his November victory at the Mayakoba Classic.

Poor guy Kooch really getting the short end of the stick here. You win a measly 1.29 million and all of a sudden everyone wants money. You did what seemed right and gave him $5,000 like any true gentleman would. Correct me if I am wrong, but I believe most caddies make the standard 0.38580247%. When I first read the comments from Kooch this week though, I truly did not think he was in the wrong. From my understanding of it Kooch felt bad soon after the event and offered $14,000 and the caddie turned it down. The caddie felt he deserved $45,000 more. I am glad Kooch is rectifying the situation and giving the caddie $50,000 and a solid 3.8 percent. Kooch is also going to donate to the Mayakoba classic charties as well. I hope this is quicky forgotten about as everything I can tell kooch seems to be a well liked player on tour and one of the nicest people around.

The original deal that was made between the two was $1,000 for a missed cut, $2,000 If he made the cut, $3,000 for a top 20 and $4,000 for a top 10. No deal was made if he won the event and that I believe is on David Gural Ortiz “El Tucan” If I ever get a chance to caddy for anyone at any level ever there is absolutely no shot I walk into the tournament thinking that my player I am holding the sticks for wont win. Have a little confidence “El Tucan” If anyone has any connections to Matt Kuchar please let him know, I am 100% Available to caddy every weekend and will take the same agreement you had with David.

Also Just saw this joke on twitter “In a crazy sequence of events, Matt Kuchar picked up a quarter John Rahm was using to mark his ball. When confronted, he put down a nickel and walked away”

This week, I made comments that were out of touch and insensitive, making a bad situation worse. They made it seem like I was marginalizing David Ortiz and his financial situation, which was not my intention.I read them again and cringed. That is not who I am and not what I want to represent.
My entire TOUR career, I have tried to show respect and positivity. In this situation, I have not lived up to those values or to the expectations I’ve set for myself. I let myself, my family, my partners and those close to me down, but I also let David down. I plan to call David tonight when I’m off the course to apologize for the situation he has been put in, and I have made sure he has received the full total that he has requested.
I never wanted to bring any negativity to the Mayakoba Golf Classic. I feel it is my duty to represent the tournament well, so I am making a donation back to the event, to be distributed to the many philanthropic causes working to positively impact the communities of Playa del Carmen and Cancún.
For my fans, as well as fans of the game, I want to apologize to you for not representing the values instilled in this incredible sport. Golf is a game where we call penalties on ourselves. I should have done that long ago and not let this situation escalate.